Get fresh music recommendations delivered to your inbox every Friday.

by Jake Baxendale and Jasmine Lovell-Smith 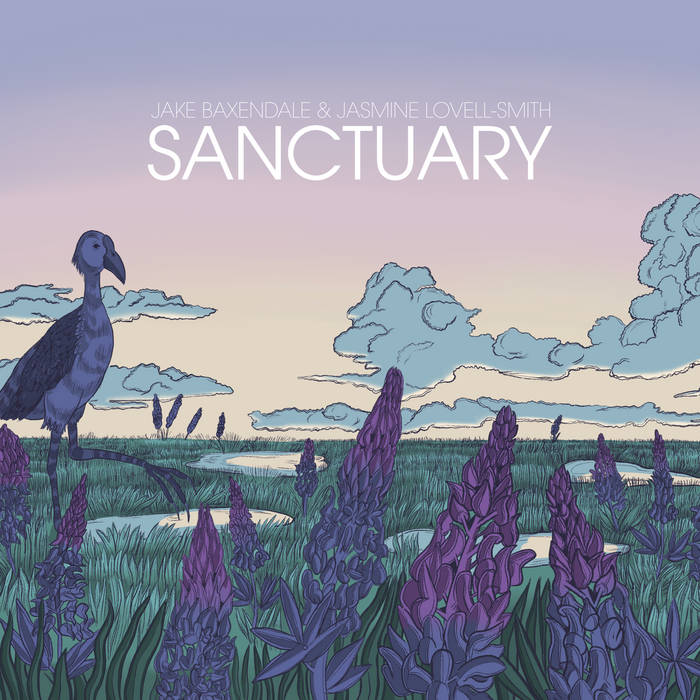 John Fenton The arranging and scope of this album elevates NZ orchestral Jazz to a new level. Much of the album has a pastoral quality and that is fitting in the world we now find ourselves in. Our geographical confinement need not be a cage if we learn to value what is under our nose.

Sanctuary is a collaborative album featuring works by New Zealand jazz composers Jake Baxendale and Jasmine Lovell-Smith for eleven-piece ensemble. The material on the album was developed as part of a live performance residency named the Arthur Street Loft Orchestra at now defunct Wellington venue the Tuatara Third Eye. Running weekly every Monday night for three years, the series featured works by local and national jazz composers for large ensemble. The musicians featured on the album are a multi-generational cast of favourite collaborators from the Wellington jazz scene. With the inclusion of flute and bass clarinet along with traditional winds, brass and rhythm, the ensemble has a rich, chamber-like texture, yet maintains the fluidity and agility that are typical of small group jazz, allowing space for the improvising voices of each musician.

The title of the album is taken from Lovell-Smith’s composition of the same name. The concept of Sanctuary gained further significance at the time of recording when much of the world was stuck in COVID-
19 lockdown while New Zealand had emerged back into relative normality. New Zealand has been a kind of sanctuary from the chaos of the pandemic over the past year, and the gratitude that the musicians felt to be able to be making music together in the same room pervades the album.

The two composer/bandleaders first met in 2007 when Lovell-Smith became Baxendale’s saxophone teacher upon his move to Wellington at age 17. They reconnected as peers ten years later when Lovell-Smith returned to Wellington after a number of years in the U.S. and Mexico. Both are accomplished improvisers and composers in their own right, with Baxendale’s works documented on his recordings with the Jac and Antipodes, and Lovell-Smith’s with her New York-based quintet Towering Poppies. Sanctuary sees both composers expanding the scope of their work into longer forms and more varied ensemble
textures, exploring a broad instrumental palette and a diverse array of strategies for ensemble interaction, ranging from tightly composed to fluid and free.

The album is centered around two suites, one by each composer. The opening work is Baxendale’s three part suite Leaves of Grass. Named for the poetry of Walt Whitman, it expresses the humanist and egalitarian ideals of the great poet, integrating a range of musical influences from the American continent, from pastoralism to free jazz to the blues. There is a songlike sense of wonder on “I: Opening” which features Lovell-Smith on a fluid soprano saxophone, aptly supported by a rich ensemble chorale. “II: A Chants of Paints and Joys” opens with Baxendale’s plaintive alto saxophone over a melancholy brass wail, eventually accelerating into a bittersweet, dance-like theme. Drummer Hikurangi Schaverien-Kaa heralds the transition to “III: I Sing the Body Electric,” an unabashedly celebratory down-home bluesy piece featuring the guitar work of Aleister James Campbell. The sense throughout Leaves of Grass is of an earthy reflection upon nature, community, and the ups-and-downs of life.

Lovell-Smith’s “Noche Oscura” follows, a haunting, minor chorale which shows another facet of the ensemble's performance as they maintain a sense of delicately listening throughout. Next is the other
major work of the album, Lovell-Smith’s Sanctuary, a suite in three continuous movements presented here as a single track. The piece represents Lovell-Smith’s emotional journey upon moving back to New Zealand after a number of years abroad to embark on doctoral studies in music. The sanctuary the piece refers to is an internal sense of calm and groundedness that she has sought to cultivate to carry her through these challenging transitions.

“I: Optimism” opens with Louisa Williamson’s mellifluous tenor saxophone over a lilting accompaniment, evoking the bright-eyed excitement of starting a new venture. The joyful finish of the piece dissolves into the atmospheric “Interlude,” where overlapping improvisations mark the transition to the muddied waters of “II: Strangely Familiar.” Resonant bass clarinets set the scene for a wistful soprano saxophone theme, evoking the experience of emotional overwhelm. An undulating, collective improvisation at the end of the work aids the transition to “III: Inevitable.” Accumulating melodies build tension over an insistently pulsing bass, eventually reaching a much-needed release to a burning swing feel. Blair Latham’s gritty and exuberant baritone sax solo leads the piece with steely determination to a surprising finish. Baxendale’s “Sleep (A Glimpse of Plimpse)” is an evocative postscript to the album. The ensemble explores Baxendale’s dream world in a beautiful collective meandering, feeling their way through the fog together.

Jake Baxendale is a saxophonist and composer based in Wellington, Aotearoa. Raised in remote Golden Bay, he demonstrates in his life and music a freedom of expression, a love of nature and a community oriented mindset that is heavily influenced by his upbringing. Jake's music has taken him throughout Aotearoa, Australia and South Korea to New York City. His work has been recognised by APRA NZ (Best Jazz Composition, 2020) and the Aotearoa Music Awards (Best Jazz Album/Artist - nominated 2015 for "Nerve", 2019 for "Good Winter" and 2020 for “A Gathering”). As well as performing and composing, Jake is involved in the local and national jazz community as the musical director of the Rata Music School jazz ensemble, curator of the Arthur Street Loft Orchestra concert series, and founder of jazz networking and advocacy group, Jazz Aotearoa.

Jasmine Lovell-Smith is a composer and soprano saxophonist from Wellington, New Zealand whose work explores the intersections of jazz, improvisation and chamber music. She was based for a number of years in the U.S. and Mexico, during which time she released two albums with her New York-based quintet Towering Poppies, graduated from Wesleyan University (Middletown, CT) with a Master of Arts in composition, and taught jazz studies and saxophone at the Universidad Michoacana de San Nicolás de Higalgo in Morelia, Mexico. Jasmine performs regularly with her own ensembles the Noveltones, the Jasmine Lovell-Smith Quintet, and as part of the Wellington composers’ collective the Arthur Street Loft Orchestra. She is an Artist Teacher at the New Zealand School of Music - Te Kõkī.

Jasmine Lovell-Smith is a composer and saxophonist from Wellington, New Zealand who writes jazz and chamber music for a variety of ensembles. Jasmine spent a number of years in the US (NYC and CT) and Mexico before returning to New Zealand in 2017.

Bandcamp Daily  your guide to the world of Bandcamp